MyPiC is a Visual Basic for Application (VBA) macro for Zeiss confocal microscopes running with the ZEN software (version black >= ZEN2010). The macro has been developed in the group of Jan Ellenberg, EMBL, Heidelberg, and replaces the AutofocusScreenMacro.

Disclaimer: MyPiC has been tested on Zeiss LSM 780 microscopes with ZEN 2010, 2011, and 2012, and LSM880 microscopes with ZEN2.1 and ZEN2.3. We don’t guarantee that it will work on other configurations and we don’t take any responsibility for damage occuring during or after the use of MyPiC.

Throughout this manual we will use the following definitions:

For any issues please contact one of the developers in the Ellenberg group at EMBL, Heidelberg, and provide the version of the software, the full version of your ZEN software (Help->About), and all the log and err files. If you have a ZEN version higher than 2010 and the macro complains that it does not find Zeiss.Micro.AIM.ApplicationInterface.dll, you may need to register it manually.

You can try this fix

• When you uninstall ZEN make sure to un-register using

Setting up an experiment with MyPiC

After MyPiC has started, the user proceeds through several steps before starting an experiment. When an experiment is repeated all settings can be reloaded from example images and configuration files (see Start acquisition, save and reload settings).

The interaction with the adaptive feedback microscopy is explained in

Create jobs in the JobSetter

In the JobSetter window the user can create Imaging and FCS jobs to be used in one or several pipelines. The user specifies acquisition settings within ZEN and then uploads the settings into the VBA macro as a job. Imaging jobs can also be created by loading a set of microscopy images (czi or lsm format) previously acquired on the same microscope.

Caution Do not load settings from images acquired on a different microscope. This may not work and impair the functionality of the system.

Caution If using Tile imaging and Online image analysis set the Online image stitching threshold to 1. Otherwise the generated image will not have the size expected by the macro. This will impair the computation of new coordinates.

Create imaging jobs with the JobSetter

Remarks for the imaging settings

Create FCS jobs with the JobSetter

For FCS jobs the loading is similar as for imaging jobs. However, you can't load the settings directly from a file into the JobSetter. If using a file, please load the file into ZEN and press Re-use. Several different FCS settings can be stored. For this the user must use different names of the light-path for each FCS job.

Add tasks to the Default Pipeline

In a pipeline the user specifies the sequential order of imaging and FCS tasks from jobs previously loaded into the macro using the JobSetter. For a FCS task, FCS positions need to be specified via the adaptive feedback method otherwise the FCS measurement will not be acquired. The Default pipeline is the imaging workflow executed at every position and repetition.

Set execution, saving, and processing options of a task

For each imaging and FCS task several options can be specified. These determine when to execute and save a task. Furthermore, the user can set a Z-offset with respect to the reference Z-location (see also Define stage positions for default pipeline).

For imaging tasks the user can specify further processing steps. For instance, the macro can compute a new XYZ position from the center of mass of the fluorescence image. The current reference position can then be updated with the computed new position (options TrackXY and/or TrackZ are on). This feature is useful to track bright objects in 3D. More complicated processing steps can be achieved when an external image analysis program is used (see also Adaptive feedback microscopy/Online image analysis).

The computations Center of mass and Center of mass (thr) within MyPiC do not work with images acquired with the Airy Detector. To track objects using the Airy detector acquired images refer to the Adaptive feedback microscopy/Online image analysis. 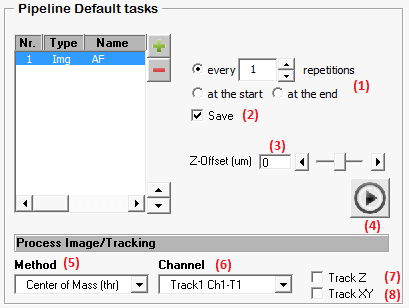 Explanations of the buttons

The user needs to define the time interval and number of repetitions executed at every position. Note that compared to ZEN Time Series mode the hardware time overhead is higher (~0.5-2 sec depending on the settings), limiting the minimal time-interval. The advantage of MyPiC is to perform different types of imaging and optionally to combine the workflow with image analysis at every time-point and position. Each repetition is saved in a seperate file with the suffix TXXXX.

MyPiC allows the user to acquire images using different stage positions. Positions are specified by moving the stage and pressing the Mark (8) button in MyPiC. Positions and subpositions can also be loaded from a file.

Explanations of the buttons

Images and FCS measurements are saved in a main directory specified by the user. A sub-directory per position/subposition is automatically generated.

Each time point and each position is saved in a separate file. The file name contains the ID for well, position, and time point. For the default pipeline this reads

Each well is saved in a separate directory named

If the number of subpositions is > 1, there is a subdirectory per subposition.

Start acquisition, save and reload settings

After all the previous steps have been performed, acquisition can be started from the main menu of MyPiC. To reload an experiment without performing every single step the user requires

A file PipelineConstructor.ini is automatically generated when the start button has been pressed.

Glass based reflection autofocus and imaging

In this workflow at each repetition the microscope acquires a XZ scan and estimates the Z position of the glass reflection line. Imaging is then performed at a certain Z offset from this estimated position.

Define an autofocus job (named e.g. AF) and an imaging job (named e.g. LR). In MyPiC set in the Default pipeline as first task AF with processing Center of Mass (thr) and Track Z. The second task is LR. Specify a Z offset value to achieve the required distance from the cover glass.

For the imaging settings try to use the same light-path for both jobs. For example use 488nm and 561nm laser to image GFP and RFP and 633nm laser to measure the glass surface reflection. For the autofocus choose a XZ line scan with several stacks. In absence of a piezo a larger slice interval and smaller Z range can be used in order to avoid a slow acquisition.

For the XZ reflection of glass scan do not use Fast Z line. This mode is not precise enough.

Example settings are given here:

This workflow can track bright objects at low resolution, followed by imaging the object of interest at high resolution. The pipeline works best for sparse objects. If several bright objects are in the same field of view, the tracking of a single object may fail.

Define a low resolution job, named LR, with a large field of view (low zoom) and fast acquisition. Define a high resolution job, named HR. Try to use similar light-path settings for the two jobs. Add to the default pipeline LR as first task with processing Center of Mass and Track Z, Track XY. Specify the channel to process. Add the HR job as second task.