Adaptive feedback microscopy are experiments where the microscopy software interacts with an image analysis software. The image is processed and depending on the results a different imaging protocol is started.

The Automated FCS plugin monitors a folder for new images generated by MyPiC and the LSM microscope. When a file matches a specified task in a pipeline the image is processed according to:

Install FiJi to a directory where you have writing rights. Make sure that the binary options are set to black background Process -> Binary -> Options -> Black background.

Without compiling the jar files

Compilation of the jar files

The user starts the plugin from Plugins > EMBL > Automated Fcs.

The wiki contains the following sections:

Directory to monitor and parameters GUI

The user can specify up to three images that will be analyzed by the plugin (Job1-3). The images should match with MyPiC tasks in which processing is set to Online image Analysis. Commands and parameters are written in the WindowsRegistry

After segmentation objects that are within a certain area range and fluorescence intensity range are selected. From these objects the plugin picks one or more objects to be used for specifying imaging coordinates and FCS positions.

The plugin allows for object based tracking of a single cell using a nearest neighbor algorithm (Command: focus and Number of particles = 1). This can be used to perform long-term high resolution imaging of moving objects. 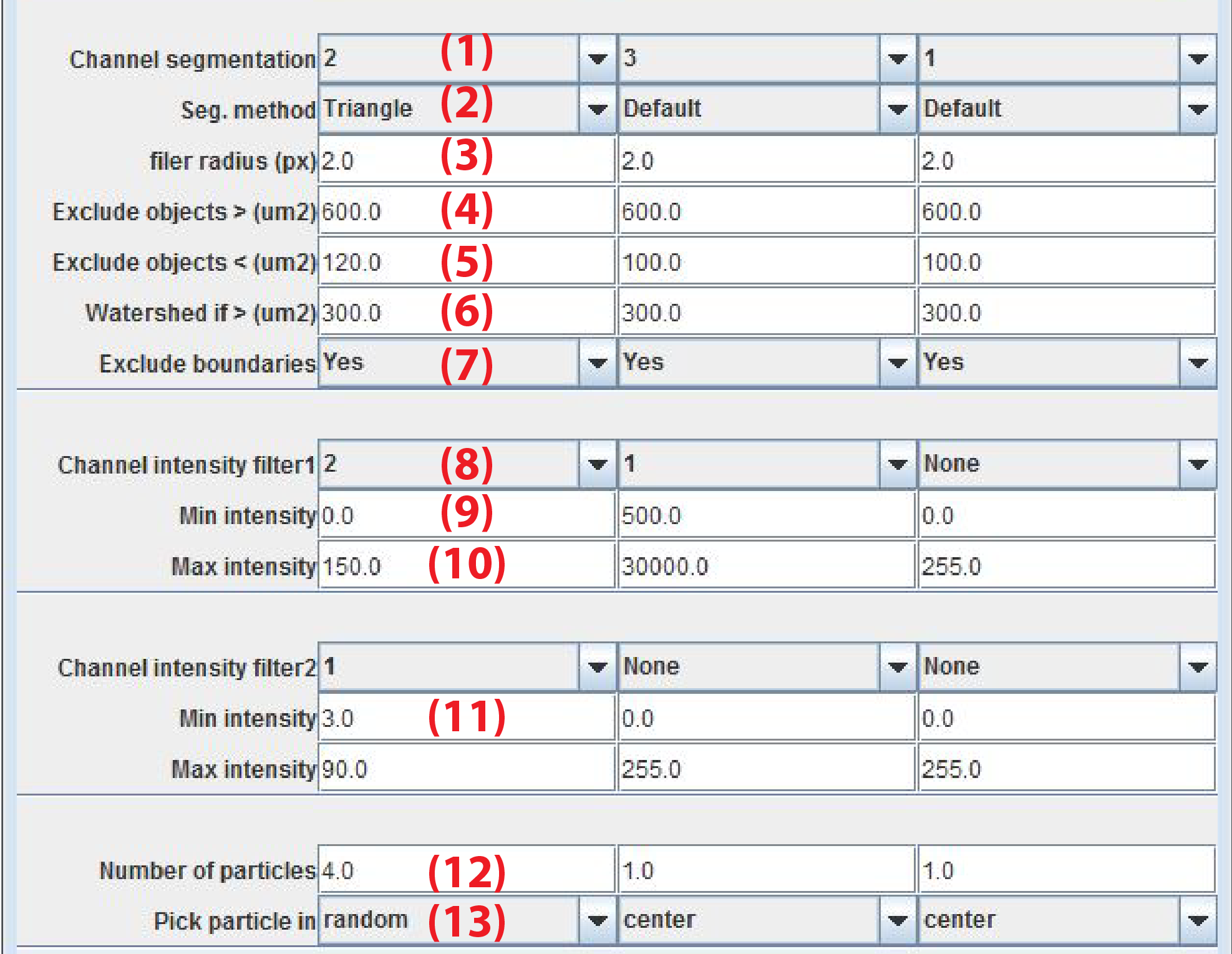 Note that FCS measurements are only performed by the microscope if the plugin sends the command setFcsPos or setFcsPos;focus to MyPiC. The points are placed with respect to the segmented primary object so that they are as distant as possible. The user can specify the distance from the boundary of the segmented primary object. FCS points can be placed only if a single object is chosen (Number of particle = 1). The rational is to associate a single image to FCS measurements corresponding to one cell/object.

Test and save settings commands

Press Start to start the plugin and automatically process files created in the directory to monitor. Press RunOnDir to process a whole directory and test the segmentation pipeline.

When objects of interest are found, the segmentation results are saved to a jpg file. The output directoy is set in Analyze results saving.

If analyze only new files is clicked, only new generated files are processed. In case the user restarts MyPiC in the same folder, old files need to be deleted. If this option is not on, the plugin looks for changes in the files. In this situation it can occur that the plugin processes one file twice.

We show an example for an Automated FCS workflow that can be applied for a FCS-calibrated imaging pipeline or high-throughput FCS experiments.

The following parameters are used:

Cells express a fluorescent protein and their DNA has been stained with SiR-DNA. The workflow of MyPiC is as follows: