VBA tool to perform imaging and fluorescence (cross)correlation spectroscopy (F(C)CS) measurements and automatically save FCS positions to a xml file for later reuse. The tool can be used to create data for FCS-calibrated imaging. It requires Zeiss LSM microscopes running with ZEN black (version >= 2010).

To compute bleach corrected correlation functions some programs require the photon counts raw data. In ZEN you need to specify this in the Maintain menu. A directory does not need to be specified. FCSRunner copies the *.raw files in the current directory.

For any issues please contact one of the developers in the Ellenberg group at EMBL, Heidelberg; and provide the version of the software and the full version of your ZEN software (Help->About). If you have a ZEN version higher than 2010 and the macro complains that it does not find Zeiss.Micro.AIM.ApplicationInterface.dll, you may need to register it manually.

You can try this to fix:

Before running an experiment the user first defines imaging and FCS settings in ZEN. The macro will use these settings. When pressing one of the running options; the macro will acquire an image and perform the FCS measurements. In additon, a xml file is generated that contains the image coordinates.

Imaging Settings For FCS-calibrated imaging use an uneven number of Z slices (1, 3, 5, ...). This ensures that each FCS measurement corresponds to a pixel in the image.

Stage Z position and FCS Z position are linked. The FCS measurement will always be with respect to the focus and stage position.

BUG When several stage positions are added some positions may end up shifted with respect to the expected location. Therefore, before launching the measurements do visit all stage positions (double click) and verify the correct positioning. Eventually update the position of a wrongly assigned stage position. 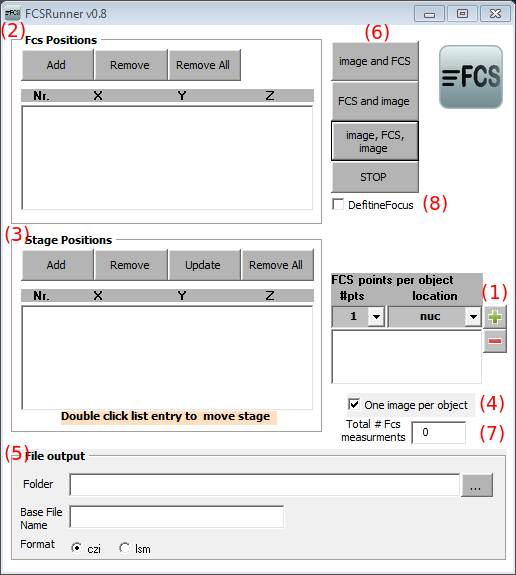 The FCSRunner saves the fcs text file and raw data of the measurements (ID_baseFileName.fcs and ID_baseFileName_ZENinternalID_R<NrRepetition>_P<ptNr>_K1_Ch<channelNr>.raw). These files are needed for further processing using programs such as Fluctuation Analyzer.

Each FCS measurement generates a xml file (ID_baseFileName.xml) that contains the path to the image associated with the measurement, the stage and focus wheel position. Furthermore, the xml data stores the pixel position and class/location of the FCS measurements. The object ID is > 1 if more than one cell is acquired per image.